Environmental, conservation and wildlife groups, many of which once supported the RFS, now oppose it because of these harmful unintended consequences.

The Environmental Working Group (EWG), a leading environmental organization, says that corn ethanol is NOT a renewable fuel. In fact, EWG research analyst Emily Cassidy wrote recently that "Corn ethanol has been an environmental disaster…Corn ethanol, instead of reducing carbon emissions as claimed by the industry, is actually much worse for the climate than gasoline." Read the entire Cassidy blog post, here.

The National Wildlife Federation (NWF), the leading voice for protection of wildlife habitat, issued a report in December 2016 entitled "Fueling Destruction: The Unintended Consequences of the Renewable Fuel Standard on Land, Water and Wildlife." The NWF report laments the fact that the RFS has led to the conversion of over 7 million acres of sensitive prairie, rangelands, wetlands and forests into cropland, which has resulted in devastating loss of "important wildlife habitat and critical ecosystem functions like water filtering across the country."

The Clean Air Task Force (CATF) now says "Numerous analyses have shown that the lifecycle greenhouse gas emissions for conventional biofuels like corn ethanol are as high or higher than those for regular gasoline."

Even the National Resources Defense Council (NRDC), which once lobbied for passage of the RFS, is now having second thoughts. The NRDC now admits that the RFS has created too much corn ethanol, which they say isn't sustainable over the long term. According to NRDC, the RFS mandated corn ethanol requires too much land, water and fertilizer to produce, and says "there's ample evidence to suggest that ethanol production may actually end up generating more carbon pollution than gasoline."

Also having second thoughts is former member of Congress and House Energy & Commerce Committee, Rep. Henry Waxman (D-CA). Rep. Waxman was one of the staunchest supporters of the federal biofuel mandate and chaired the Committee when Congress expanded the RFS in 2007. Since then, he has reversed course on the RFS and recently released a report with Mighty Earth and Action Aid USA, which highlights the failures of the RFS and its devastating environmental impact. 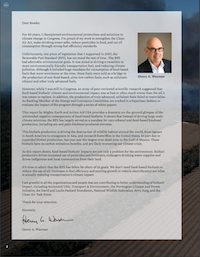 It's time to admit that the RFS has fallen far short of it's goals. We don't need food-based biofuels to reduce the use of oil."
- Henry A. Waxman

The Government Failed to Report Environmental Impacts of RFS to Congress

To make matters even worse, the government agency responsible for administering the RFS, failed to report to lawmakers about the negative environmental consequences of this failed law. The Office of the Inspector General at the Environmental Protection Agency (EPA) in August 2016 issued a damning report detailing how the EPA failed to comply with provisions of the RFS which required the agency to report to Congress the environmental impacts of the RFS. The Inspector General's report led many lawmakers to conclude that the government had for years simply been sweeping under the rug the truth about how the RFS has negatively affected the environment, contrary to its original intent.

A Pricewater-
houseCoopers study found that the federal mandate on corn-based ethanol substantially raises costs for chain restaurants on a wide variety of food commodities by $3.2 billion a year.

Learn how the RFS mandate is already impacting the food chain and consumers.